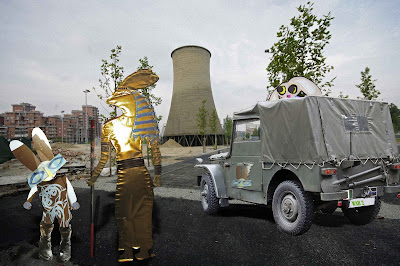 The Wabbit drove straight to Pluto Park to think. "What did I forget?" he thought. He slouched with his paws in his fur, considering the matter, when something made him jump. "Nice suit, Commander. Very racy." The Wabbit looked up to see the imposing figure of Unut, Rabbit Goddess - and knew to cancel everything in his diary. "You’re out and about, Your Goddessship," said the Wabbit tentatively. "Please try to call me Unut." said Unut and paused. "We ancients were watching your last adventure." "Oh yes?" said the Wabbit. "And it appears that you came across something we want." "Oh yes?" said the Wabbit. "And it also appears that you left it behind," "Ah yes!" said the Wabbit positively. The Wabbit knew he should know, and he racked his brains and fought for time. "It's big and pointy," he said. "Yes," said Unut, "unlike your egg timer over there." Unut gestured to the cooling tower and the Wabbit shook his head sadly. "The Alien’s structure is a pyramid ship and we would like it," said Unut. "You’d like it back?" said the Wabbit. "Did I say that?" snorted Unut. "It’s not ours, we’d just like it. It’s a portable place of power." "Of course, Unut," said the Wabbit, brightening. "Consider it done!" "There’s one more thing" said Unut. The Wabbit tried to look chirpy. "Tell your young consort she can come out now." Lapinette quickly ducked behind the jeep. "Too late!" sighed the Wabbit.
at February 13, 2013