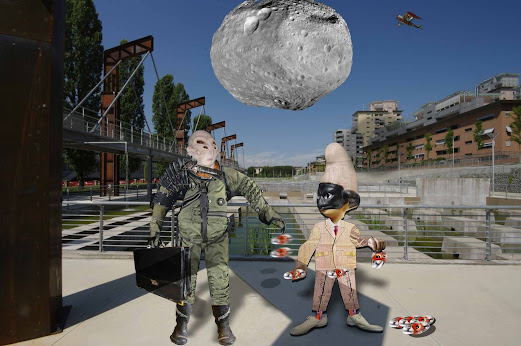 The Alien Pilot made his way to Pluto Park where Pio Pulcinella waited to convert the Wabbit’s 79 trillion euro, quietly borrowed from the treasury vaults at the Department. As usual, Pluto Park was deserted. No-one there ever looked up, so the asteroid went unnoticed. "You look strange," said the Pilot to the waiting figure. "Which planet are you from?" "Napoli," said Pio. "Is it distant?" asked the Pilot. "Light years," said Pio. "Let’s see the colour of your currency," said the Pilot. Pio flipped the units and they span into the Pilot's waiting hand. "These are Squids," said Pio. "The Semi-Quasi Universal Intergalactic Denomination is fully transferable in participating planets from Andromeda to the Sombrero Galaxy." "Not here?" said the Pilot. "No," said Pio, "This is an unbearably provincial planet, not for the likes of us." "Then I must be off," said the Pilot. Pio waved farewell then paused. "Please drop off the asteroid at Planet OGLE-2005-BLG-390Lb." Pio smiled. "Here’s another 50 Squid for your trouble." The Pilot stuffed his pockets with Squids and turned to go – but he suddenly turned back. "Perhaps I’ll visit your planet some day." He proffered a hand and Pio clasped it firmly. "The Planet Napoli will welcome you with a warm embrace," said Pio. "Does your planet have  a motto? asked the Pilot. "See Napoli and Die," said Pio, "so I wouldn't delay." "I hate delay," said the Pilot hurrying off.
at February 07, 2013