9. The Wabbit and the Elusive Pyramid 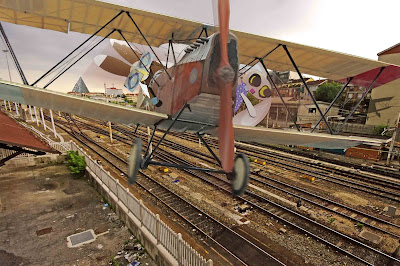 Day turned to dusk and the Wabbit and Lovely Lapinette were still looking for the pyramid. Susan the Biplane flew across the city, then swooped along the railway line to Lingotto.  The Wabbit leaned across and nudged Lapinette. "Do you know? I think I saw it for a second." Lapinette strained to hear him above the wind. "So did I!" she yelled, "but it seems to have moved." "Where? " asked the Wabbit. "Well, it was in front of us," shouted Lapinette, "but now it seems to be behind us." "As if it had a mind of its own," said the Wabbit for the second time that month. "Some say the pyramid has great healing power," he murmured. "That's tosh, Sir" said Susan the Biplane, "unless pyramids hand out medicine at the pharmacy." She banked and started to turn. "Look! It’s over there!" said Lapinette. But the Wabbit knew the city well. "It can’t be," he said, "because that spot is occupied by another structure." The Wabbit thought long and hard. "A water tower for the railway," he said, "but can two buildings be in the same place at once?" "It’s mathematically possible," said Lapinette. "But unlikely Marchesa, Ma’am," said Susan. "Oh let’s drop  the formality," said Lapinette, "you can call me ..." "Sir!"  interrupted the Wabbit.  "Head for the Pyramid, Susan and we’ll teach it sums."
at February 15, 2013