14. The Wabbits seize the Pyramid 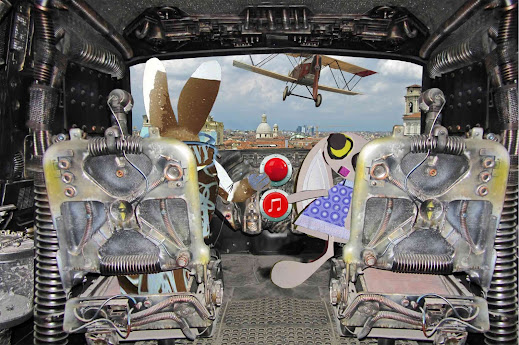 The Wabbit kicked the control room door, but it slid open. Music started and they heard Tock the Talking Bomb singing, "Sex bomb, Sex bomb." "We need to be quick," shouted Lapinette. The Wabbit jumped into the pilot’s seat but he and Lapinette looked out on a completely different location from before. Susan the Biplane seemed to have followed them and she buzzed up and down, to attract their attention. A radio on the console crackled.  "I thought you’d never get there. Commander," said Susan. "Good to see you, Susan," said the Wabbit. "Have you seen any escape pods?" "No Sir, but can you do something about the music?" "Please repeat," said the Wabbit, "I can’t hear you for the music." "A song has taken over every station in the city," said Susan. "Sex bomb, Susan," said the Wabbit. "Thank you, Sir," said Susan. "This bomb’s made for lovin’," sang Tock and the music became shrill. "I can take no more," said Lapinette and she hit the lower button. The song faded and there was a deflating sound. Lapinette and the Wabbit grinned. "What about the other button?" asked the Wabbit. "You’re the button expert," said Lapinette. The Wabbit struck the top button a mighty blow. The sound started with a squeal, then a grinding that became a groaning. Gradually, inexorably, the pyramid lifted from the ground and swivelled round. "I can see the Egyptian museum," said the Wabbit. "She’s going home," said Lapinette.
at February 25, 2013