12.The Wabbit and the Five Minutes 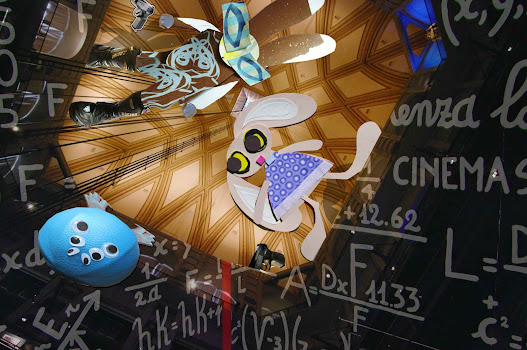 Suddenly the floor fell away. The Wabbit and Lapinette found themselves looking down on Tock, the Blue Guardian of the Pyramid, who had promised to delay his detonation for five minutes. The Wabbit spoke first. "Tock, what is your purpose?" "To defend the Pyramid," said Tock. "On what basis do you perceive a threat to the pyramid?" "The basis of my sensor inputs," said Tock. "Did you ever consider you're making decisions based on false data?" said the Wabbit. "Proceed," said Tock. Lapinette was suddenly inspired. "What kind of bomb are you?" she asked. Tock thought for a while and then sang. "Sex bomb, sex bomb. Baby you can turn me on!" His eyes rolled round and round and his feet scrabbled. Lapinette shook her head. "Your data is badly corrupted." Tock did a little dance and sang again. "I can give it to you any time because you're mine. Ouch, sex bomb, baby!" The Wabbit sighed. "You can only detonate once," he said firmly. "That’s true," said Tock. "It will be the end of you," said the Wabbit. "I will cease to exist," said Tock. "You will cease to exist on the basis of false data," said Lapinette. Tock’s eyes sharpened. "I have no proof that I’m a sex bomb,"  he said solemnly. Lapinette and the Wabbit shook their heads. "But I have no proof that I’m not," said Tock, "so I must consider this further." Silence fell and the Wabbit and Lapinette realised Tock was asleep. The Wabbit’s five minutes had passed with no explosion. "Phew!" said the Wabbit.
at February 22, 2013