1. The Wabbit and the Alien News 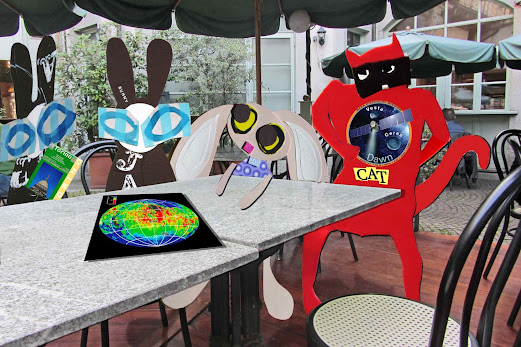 The Wabbit gazed enthralled at a map he'd borrowed from Susan the Biplane’s cockpit, but not for long. "Commander, you need a different map," said Wabsworth in excitement. "I already know Turin, Wabsworth," murmured the Wabbit. "I need no map." "You don’t know what’s happening!" said Wabsworth, raising his voice. "There’s an alien!" "Any particular alien?" enquired the Wabbit. Wabsworth was aghast. "Four eyes, eight ears, space suit, scowly look!" Lapinette turned to the Wabbit. "You did say the Alien Pilot might pop up anywhere," she said and kicked him under the table. "Here isn’t anywhere!" yelled Skratch. "Here’s here!" The Wabbit thought very long and very hard. And then he spoke. "Good grief," said the Wabbit. "Of all the towns in all the universe, he had to appear in mine!" "We have to find him and quickly," said Lapinette. "Well, he’s looking for us," said the Wabbit, "or more precisely, his money." Lapinette shook a paw. "How much did you tell him the asteroid was worth?" "79 trillion euro," said the Wabbit. "And the rest!" groaned Skratch. "The Wabbit suddenly grinned. "We could pay him the 79 trillion." Lapinette stared. "Kind of," smirked the Wabbit. Lapinette’s eyes shot in the air. "Then we could send him to our special contact who will convert the currency." The Wabbit shook with mirth. "He already fell for that one," said Skratch. "I’m getting to that," laughed the Wabbit. "You’re sinister," said Lapinette.
at February 04, 2013