11. The Wabbit and the Blue Guardian 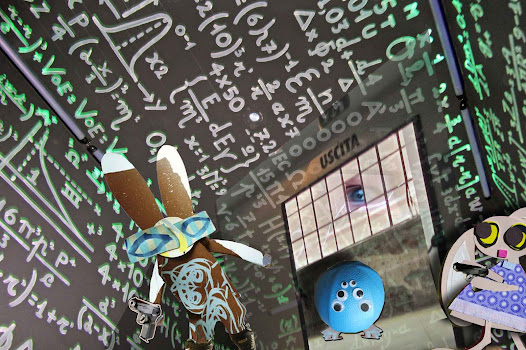 Inside the pyramid, the Wabbit and Lapinette found themselves in a very strange room indeed. Stranger still, it had a clearly labelled exit. The Wabbit screwed up his eyes. "What do all these equations mean, Lapinette?" "Gibberish I thought," said Lapinette, "but they seem to be about light." "Let there be light!" said a voice. Lapinette pointed her automatic at a creature emerging from the doorway. "We come in peace." said the Wabbit, pointing his own automatic. "I don’t," said the Blue Creature. "OK, neither do we," said Lapinette. "Now who are you and why do you keep moving our pyramid?" "My name is Tock. Ownership of the pyramid is a matter of debate and not for the likes of me." "What is for you?" asked the Wabbit. "I have my prescribed function," said Tock. "Elaborate!" shouted Lapinette. The creature bounced up and down, then scrabbled its feet on the floor. "Detonation," said Tock. "Why would you detonate?" asked the Wabbit. "Perceived threat to the pyramid," said Tock. The Wabbit looked confused and Tock scrabbled again. "I am the guardian of the pyramid, appointed by my creators on Exogal 3." "That’s silly," said Lapinette. "We’re not a threat to the pyramid." "Do persuade me," said Tock. Instantly a ticking sound filled the room and Tock’s feet scrabbled. "Oh, I’d love to chat," smiled the Wabbit. "Detonation in 5 minutes," said Tock.
at February 19, 2013