6. The Wabbit's Talk at the Taberna 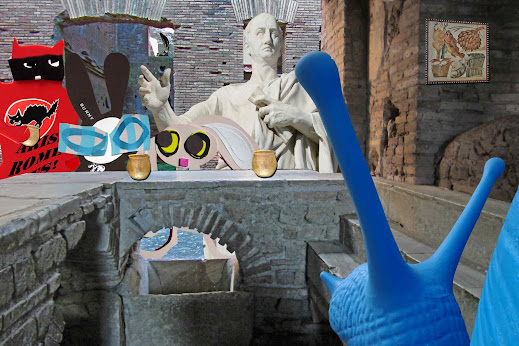 Big Blue Snail was placed in charge of rustling up supplies for the planning meeting and he busied himself with gusto. "What’s on the menu?" asked the Wabbit. "I have mostly eggs and gloopy wine mixed with sea water," said Snail. "Fine," said the Wabbit with little enthusiasm. "What else?" said Skratch the Cat. "I found a large basin of garum," smiled Snail. "What’s garum?" asked the Wabbit. "It’s fermented fish sauce with salt. It’s very smelly and popular." "I’ll have some of that!" said Skratch. Lapinette twitched her nose. "Yuk," she said. "Surely there’s something else?" The greatest pleasures are only narrowly separated from disgust," said Cicero, "and we must sustain ourselves for the task ahead." "Bring it on Snail," said the Wabbit, "and I will tell you of my plan." Everyone went quiet. "They know they have the Stone and believe it‘s magic. So we must use magic against them." "There isn’t really magic as such" said Cicero. "They don’t know that," said the Wabbit. "Know any tricks?" "I know some tricks," said Skratch. "Then you’re in charge," said the Wabbit. "You are the magician and the Agents are your audience." "Do I get to wave my paws around?" asked Skratch. "Frantically. And promise to double what they’ve got," smiled the Wabbit. "Think they’ll fall for it?" asked Lapinette. The Wabbit shrugged. "They’re tough but not over-bright." Cicero nodded gravely. "Everyone likes something for nothing," said Snail.
at January 02, 2013