7. The Wabbit & the Spiders from Mars 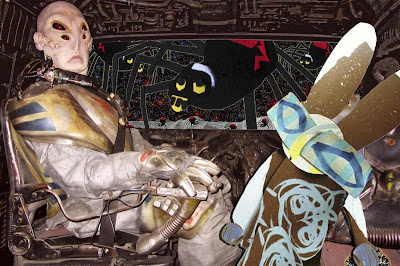 The Wabbit rose and hopped rapidly from the bridge. "I won’t mess with the red spiders from Mars," he said, shaking his head. Outside, Marshall Duetta Spyder and her cohorts began to weigh heavily on the structure and the Pilot’s craft shook violently. Interior lights dimmed as more and more spiders clung to the fuselage. The Wabbit looked back alarmed. "They’ll asset-strip your asteroid until there’s hardly a spare quark left," he hissed. "So I’m off while I still have fur. Stay if you like." "Stop!" shouted the Pilot. The Wabbit hesitated and stared steadily. "About that trade?" grimaced the Pilot. "We'll see, but it's difficult now," muttered the Wabbit. "You really shouldn’t have waited."  "Don’t leave me to these spiders," said the Pilot, "I hate spiders." The Wabbit considered, then appeared to come to a decision. "Just give me time to get back to my craft and we’ll fix you in our tractor beam." "Then?" asked the Pilot. "Slipstream drive to the Planet Ogle -you'll be there in a trice." "Where’s Ogle?" said the Pilot. "Ogle-TR-56b," said the Wabbit.  "John Kepler of Kepler, Copernicus and Brahe will meet you." The Pilot gazed at the spiders and shifted uncomfortably. "How will I know this Kepler?" "Have no fear," said the Wabbit, "he’ll keep an eye open for you."
at January 29, 2013