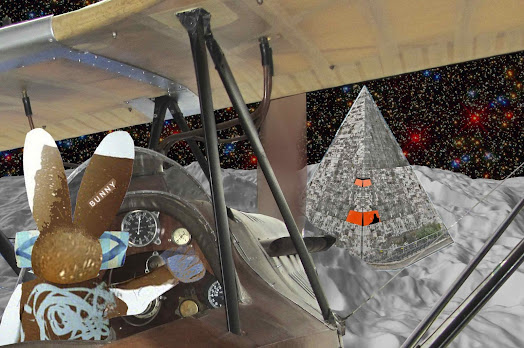 Susan the Biplane closed on the asteroid and orbited for a closer look. "Whoa! That looks unusual," said the Wabbit. "What sort of creature lives in a house like that?" Susan continued her orbit." I think I can make out detail, Sir." The Wabbit stared at the structure. "We’d better investigate," he said finally. "Do you want me to land, Sir?" asked Susan. "Hang on Susan, Let’s give a false impression, just to be on the safe side." Susan orbited again. "You trained at Wabbit Air Arm?" asked the Wabbit." "I did, Sir." "Then you know the manoeuvre called the Drunken Rabbit?" "Yes Sir, but it’s reserved for senior officers and reckless students." "Drunken Rabbit, that’s an order!" hissed the Wabbit. Susan threw herself high and dived straight down. "Stall! stall! stall!" yelled the Wabbit with glee. "Bank angle! Bank angle!" yelled Susan and she calmly twisted sideways and spiralled towards the ground. "Perhaps you'd like the controls, Sir," gasped Susan. "I certainly would," said the Wabbit. Snow loomed white as the Wabbit headed for the largest drift he could see. Then he lifted Susan's nose, climbed, levelled and flew six metres from the surface, barely missing the strange structure. "Brr, it’s cold," said the Wabbit, propelling the plane upwards. "I saw a shape," said Susan. "Someone’s in," said the Wabbit. "Make 'em think we’re really stupid." The air screw whined and blasted snow to all sides as Susan hurtled straight into a snowdrift.
at January 24, 2013