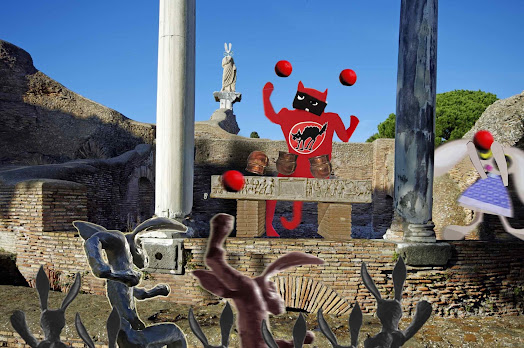 Skratch told the Agents of Rabit that the authorities were coming and made them move everything round the corner. Puffing and panting they finally threw their ball to Skratch and he began to juggle. "Watch your ball, watch your ball. Faster than they eye can see," he laughed. "It’s easy to spot the ball as it moves." The balls flew around and the Agents danced up and down. "Triple power will soon be ours!" they yelled. "The old blind cat can’t fool us!" Deftly, Skratch batted their ball behind a pillar and Lapinette rose gracefully to catch it. "Must be going, urgent appointment, completely forgot," she murmured and she sloped off as Skratch continued to juggle. Suddenly, Skratch hid the balls under the cups and stopped dead. "Now," he murmured, "where is that ball of yours?" "There it is on the left," said an Agent. Skratch lifted the cup and the Agents sighed. "Oh deary deary me," said Skratch. "How unfortunate. That’s my ball and now all the balls belong to me." "Give us back our ball!" shouted the Agents. "I really can’t see it," said Skratch. "My eyes, you know. Are you quite certain you gave me a ball?" "Yes!" screeched," the Agents. "Are you really sure?" said Skratch, scratching his head. The Agents advanced on Skratch. "Oh look, here it is," said Skratch and he bent down, overturned the table on the Agents and fled after Lapinette. "I never give suckers an even break!" he called over his shoulder.
at January 06, 2013