5. The Wabbit & the Agents' Gathering 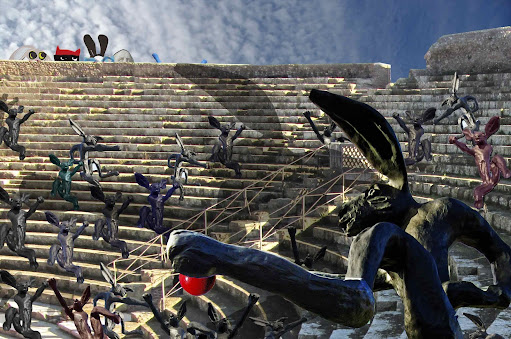 The friends clambered to the top of the amphitheatre and peered over. Agents of Rabit clustered in great number and the structure rang to their capering. A Chief Agent towered above the rest, casting a giant shadow across the terracing. "Agents!" he called. "We have the Philosopher’s Ball!" Cheers rocked the amphitheatre and air hissed as Agents punched fists high. The Chief calmly bounced the ball and caught it. "Within this magi ball is the Philosopher’s Stone, and with the Stone, we shall bestride the world." "The whole wide world!" chanted the Agents. The Wabbit clung onto the parapet and growled softly. "Shush," whispered Lapinette, "they’ll hear us." The Chief Agent kicked a leg. "What’s the first thing on our evil agenda?" he demanded. "The Wabbit!" they shouted. "The Wabbit and his ghastly do-gooding friends!" shouted the Chief. "Kill the Wabbit!" they cried. Lapinette snickered. "Shhh," said the Wabbit. "With the Wabbit eliminated we can spread hatred," roared the Chief. "Hatred!" howled the Agents. "Tomorrow is New Year," yelled the Chief, "and we who have the Stone, own the future!" "A future with no Wabbit," cheered the Agents. "There's no future without the Wabbit," muttered the Wabbit, "but we need to retreat and make a plan." "I know an old Roman taberna round the corner," said Cicero. Lapinette wrinkled her nose. "Is it OK?" she asked. "It certainly used to be," said Cicero. "Then back to the future," smiled the Wabbit.
at December 31, 2012