10. The Wabbit and the lingering Fuse 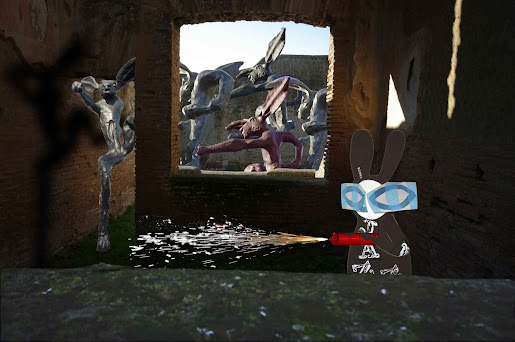 "What shall we have for dinner?" thought the Wabbit as he waited for the Agents of Rabit. "Jerusalem artichoke tubers, lightly braised perhaps." The Wabbit’s mouth began to water. "Curly carrot shavings as a side-dish and mixed salad," he added. In his mind, the Wabbit saw the waiter advance and he heard his voice. "To drink, Commander?"  Heavy paw steps nearly interrupted his imaginary dinner but not quite. "The usual," answered the Wabbit, lighting the explosive. For a while he watched the fuse fizz merrily. "Year in, in year out, the accursed Agents of Rabit," he moaned. "What a pest they are." He wondered for a moment if he would be happy without them. He decided not. "If they came this way," he mused, then Skratch and Lapinette have certainly captured the philosopher’s ball. I wonder what the stone looks like?" The fuse was half gone and it sputtered angrily. The Wabbit took aim then deliberately looked away. "I’m used to this," he thought. "What if I let them off? What if I got them to apologise? What if they could be reformed?" Then another voice broke in and this time it wasn’t in his head. "Hey stupid Wabbit," said the Chief Agent. "Your fur is last year’s colour." "Grrr, that’s it," thought the Wabbit. "They can insult me all they like but they won’t insult my fur." So he spoke calmly. "Come come," he said. "You know you go to pieces over me." "Huh?" said the Agent as he watched the explosive arc through the air and the flame reach the end of the fuse. "Oh, Kaboom," sighed the Agent of Rabit
at January 08, 2013