8. The Wabbit and the Silence of Tractors 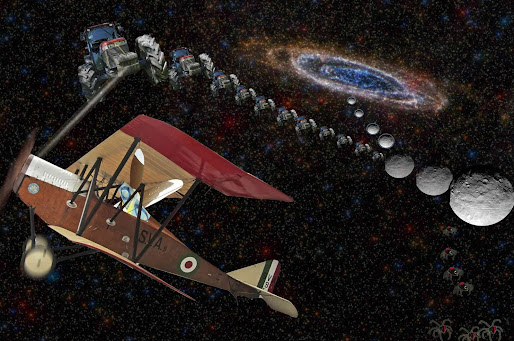 Back with Susan the Biplane, the Wabbit engaged the tractor beam and locked it to the Alien Pilot’s asteroid. "I wish I could hear the tractor beam," said the Wabbit. "There’s no sound in space, Sir," answered Susan. "Oh, I know - isn’t it a pest!" said the Wabbit. Silently, the tractor beam pulled the asteroid across space and then, when it reached the Wabbit’s coordinates, reversed thrust. Now powered by Susan’s quantum engines, the asteroid glowed blue in the slipstream tunnel  - and it shimmered as it headed for Andromeda and Planet OGLE TR 56B. The Wabbit watched for a while and then he murmured, "Cut the slipstream drive, Susan." "Sir?" queried Susan. "That’s an order Susan," snapped the Wabbit and he looked into deep space. He could just make out the smallest of blips on the event horizon as Susan terminated the drive. A silence fell as Susan programmed coordinates for home. "Sir?" she asked. "Yes," said the Wabbit. "There is no firm of Kepler, Copernicus and Brahe, Sir." The Wabbit grinned. "I made it up!" "That was fibbing sir," responded Susan. "It’s in my job description," said the Wabbit, shaking his head at the thought of his annual review. Susan persisted. "What will happen to the Pilot?" "He’ll pop up somewhere," shrugged the Wabbit. "Won’t his employers be looking for their property?" asked Susan. "I suppose they will," laughed the Wabbit. "Well now they’ll be looking for us," said Susan.
at January 30, 2013