3.The Wabbit and the Rogue Asteroid 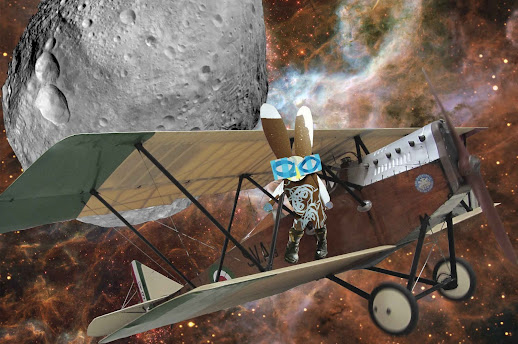 "Where is it?" asked the Wabbit. "My coordinates say it should be here." "Behind you Sir," said Susan the Biplane. "Oh," said the Wabbit. "Creepy thing." The Wabbit had a think about what to do and he hung from the biplane and pondered. "What do asteroids usually do?" he thought. "Asteroids are minor planets orbiting around celestial bodies," said Susan. "Why does everyone know what I’m thinking!" snapped the Wabbit. "Independent thought, Commander," said Susan, diplomatically. "Well, this one isn’t orbiting. It has a definite trajectory. It's almost as if it has a mind of its own," growled the Wabbit. "Sometimes they seem to," said Susan, "but technically it’s just a lump of rock." "Maybe." The Wabbit hummed a tune. "You can knock be-bop and you can knock swing. Say what you want about any old thing." "Commander?" said Susan. "But don't knock the rock," said the Wabbit. Susan wheeled and now that he was the right way round, the Wabbit looked properly. The asteroid was big, rugged and mean. "It's getting bigger,  we’re in its way," suggested the Wabbit. "Do you have visiting cards?" asked Susan. The Wabbit laughed. "Yes, they say 'The Wabbit called but you were out. Please ensure you are in the next time.'" "Perfect" said Susan and she orbited around the asteroid. "There’s a landing place!" pointed the Wabbit.
at January 23, 2013