9. The Wabbit & the Peaceful Blue Planet 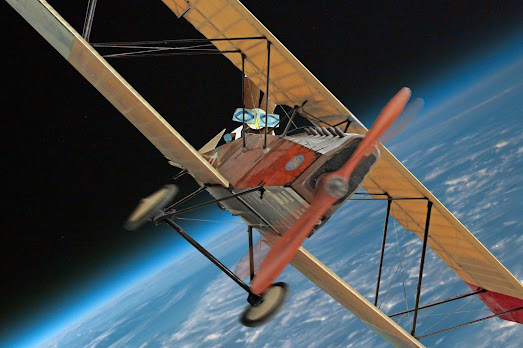 Susan the Biplane dropped out of slipstream and the Wabbit looked down. "Africa!" said the Wabbit. "Soon be home, Sir," said Susan, "perhaps there’s a Welcoming Committee." "Carrot aperitivi all round," murmured the Wabbit. Susan banked suddenly but the Wabbit kept his eyes on the blue planet. "It looks so peaceful from up here," he said. The radio crackled noisily. "Commander Wabbit, this is Wabbit Control, over." "Commander Wabbit receiving you loud and clear. Pleased to be back, over." smiled the Wabbit. "Report for a debriefing," said Control, "and leave that meteorite with the Lab." The Wabbit scowled and he pretended to make static sounds. "Control, I didn’t quite ... crick, whoosh, crackle." The Wabbit switched the radio off.  "Atmospherics, what can you do?" "Did you want to keep the meteorite, Sir?" "Yes, it might come in handy," said the Wabbit. "What for, Sir?" said Susan. "I haven’t the faintest idea," said the Wabbit, yawning. "We’ll be a while, Sir," stated Susan, "would you like a nap?" "Yes I am feeling sleepy," said the Wabbit and he snuggled down in the cockpit. "Where would you like to wake up, Sir?" said Susan. The Wabbit’s voice was quiet. "On a beach," he murmured. “And who would you like beside you?" Susan could hardly hear his reply but she thought she heard him say, "Lovely Lapincroft." The Wabbit was fast asleep.
at January 31, 2013