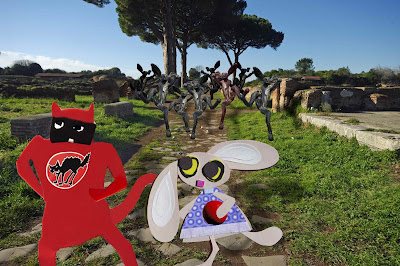 Lapinette and Skratch barrelled down the road and Lapinette clutched the ball like grim death. "Which way did the Wabbit say?" shouted Skratch. "He said left right, left right, fly down the highway, creep down the alleyway," yelled Lapinette."He wasn't being chased by the hares of hell," grimaced Skratch. "He has a surprise waiting," gasped Lapinette. "It's always a surprise with the Wabbit," said Skratch. They puffed and panted. "The philosopher's stone inside the ball, what's it like?" he asked. "I haven't the foggiest  notion, does it matter?" breathed Lapinette. "It matters to them," said Skratch, looking over his shoulder. The Agents were gaining slightly and their shouts echoed in the ruins. "We'll roast you over hot coals" they shouted. "That's weak," yelled Lapinette. "We'll staple your ears to your paws," they cried. "That's better but still flabby," yelled Skratch. "Your bones will bleach in the sun," shouted the Agents. "At least we'll get good weather," said Skratch and he quickened his pace. "There's the alleyway now," yelled Lapinette, "and there's the Wabbit!" In the distance they saw the Wabbit gesture and duck down. "Did I see the Wabbit duck?" asked Skratch. "Well he's no chicken," laughed Lapinette and they dived out of sight.
at January 07, 2013