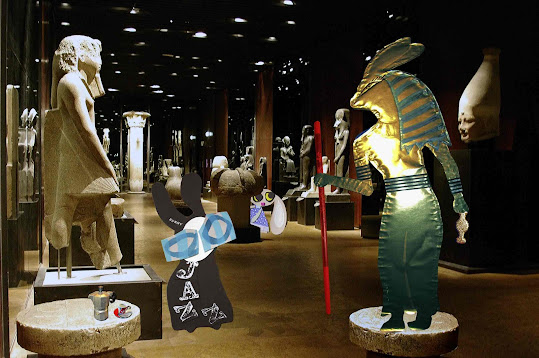 "You look sleepy, Wabbit, would you care for a coffee?" Unut’s voice was barely a whisper in the vast Basement of the Goddesses. The Wabbit yawned. "I don’t mind if I do," he said and downed a cup in a single movement. "Wabbit, I may speak only with you and I am charged with asking for something on behalf of the Goddesses." "The Goddesses!"  echoed the Wabbit. "Oh they know you well," said Unut. "They repeat your jokes incessantly and bellow with laughter." The Wabbit resolved to cut down on his jokes in case it got him into trouble. And while he was resolving, Unut spoke again." "It is Bastet, Cat Goddess, who asks that you be her champion in a certain matter." "I’ll certainly do what I can," said the Wabbit. "The venerable cats of Torre Argentina in Rome are being expelled from their ancient home in the ruins," said Unut gloomily. The Wabbit’s fur stood on end. "What!" he cried,  "I’m on my way immediately." Unut frowned. "Be still, Commander, don’t throw yourself at an enemy when you don’t know even its name." "This is personal," said the Wabbit and he hopped up and down. "You’ll need help," smiled Unut. "So take your 400 Rabbits and that Skratch the cat burglar." "I’ll round them up," said the Wabbit. "We march at dawn!" "Dawn has long passed," said Unut. "Then we march at dusk," cried the Wabbit, "and we’ll be mob-pawed and armed to the teeth." "Wait!" Said Unut, "Thoth will brief you." "I will be thrice briefed," sighed the Wabbit, who was anxious to be on his way. "Have another coffee," suggested Unut. The Wabbit nodded his head. "Then I'll jump to it!"
at November 02, 2012