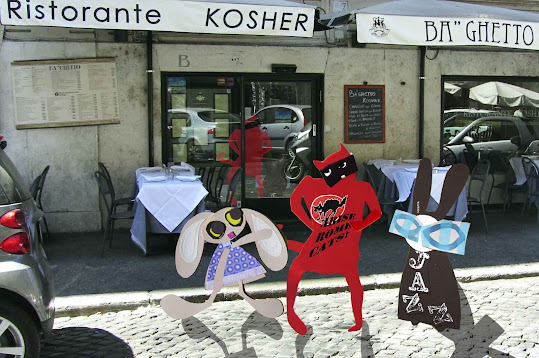 The three met for a celebration lunch just round the comer from Largo di Torre Argentina, where the Wabbit had a special arrangement with a popular restaurant. "Well hello li’l lady," said Skratch. "John Wayne!” said Lapinette, waving a paw. Skratch swaggered. "Talk low, talk slow and don’t say too much," he drawled. "What happened to the Normots?" asked Lapinette. "They’re helping the cats," said the Wabbit. "Feeding them and cleaning out their quarters?" suggested Lapinette. "No, they’re raising funds on a Fun Run," confessed the Wabbit. Lapinette hopped up and down. "It will keep them off the streets," she giggled. They all laughed but it couldn’t cover the sound of the Wabbit’s stomach grumbling. "Carciofi alla giudia for me!" cried Lapinette. "I think I’ll have ricotta cheesecake," said Skratch. "Vellutata di funghi," murmured the Wabbit. Lapinette sighed. "Are you going to show off your dialect skills?" she asked and nudged Skratch. "Mi a gh'eva, ti at gh'evi, lu al gheva," said the Wabbit. "That sounds like a conjugation," laughed Lapinette.  "It always worked for me," said the Wabbit. "But it doesn’t get my artichokes," said Lapinette and she pointed accusingly. "In that adventure, you were the Bad Tempered Emissary of the Gods!" The Wabbit cringed because he had quite forgotten that it was the Rabbit Goddess who had sent him on mission - but Lapinette hadn’t. "I wouldn’t like to be in your fur when you next meet Unut," she said. "Neither would I," murmured the Wabbit.
at November 24, 2012