7. The Wabbit & the Normots' Normality 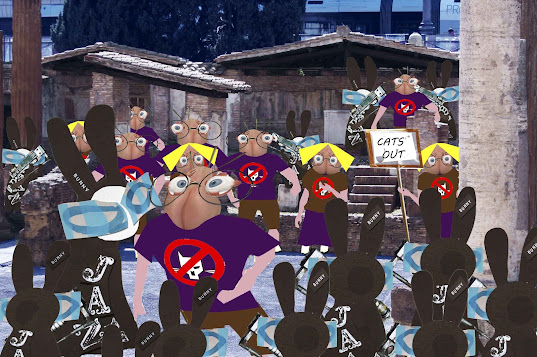 The 400 Rabbits rounded up a group of Normots responsible for expelling the cats - and brought them to the Wabbit. The Wabbit looked at them with the utmost disdain. "Abandon the territory," he said. "We won’t," they cried. "Then abandon hope," said the Wabbit with a chilling shrug. The Normots cringed back but the 400 Rabbits poked them in the back and nudged them forward. The Wabbit leant towards the Normots. "The cats have been here since the Romans," he advised, but he heard no reply. "They have staying power, and we will reinstate them." "Why?" shouted a Normot. "Because I say so!" shouted the Wabbit. "It’s not normal," said the leading Normot. "It’s just not normal at all." The Wabbit glared. "We like things to be normal," continued the Normot. "We like to speak normal." "Norma-lly," corrected the Wabbit. "It stands to reason," said the Normot with the sign. The Normots took courage and started to chant. "Hygienic archaeology, hygienic archaeology. Dirty cats out!" The Wabbit put his paws over his ears. "Shut up or I’ll shoot the lot of you myself," he said. But the Wabbit was a little embarrassed by his poor temper and adopted a conciliatory tone. "Let’s be civilised," he said. "You can do this the hard way or the easy way."  "Which is normal?" said a Normot. "The easy way," laughed the Wabbit. "Then what should be do?" asked a Normot. "Under these circumstances," said the Wabbit, "it would be normal to run."
at November 16, 2012