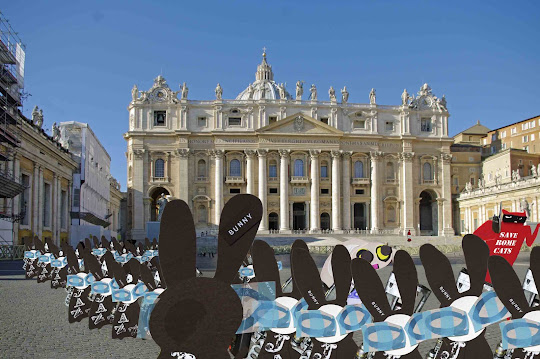 As instructed, the 400 Rabbits took Rome by surprise. Somehow Lapinette had obtained special permission and the Wabbit looked on as the 400 Rabbits shouldered their arms and swept across the famous piazza. He waved for Lapinette’s attention. "They certainly won’t expect us to come this way," he yelled. "How did you pull that off?" "Do you think you’re the only rabbit with friends in high places?" smiled Lapinette. The Wabbit grinned too and called Skratch on his walkie-talkie, as he insisted on calling it. "Go ahead to the target Skratch and round up as many cats as you can. See if you can find Antiqicat and tell him to wait for my signal." Skratch nodded and the radio hissed. “It's two klicks to target," said Skratch "So I’m headed for the short cut across the river." And with that he was gone and the Wabbit looked back. To any innocent bystander, there seemed to be as many as 4000 rabbits, because they just kept coming. Then the Wabbit heard a noise. It was the faint sound of applause and he realised something - so he called to Lapinette. "It was Cardinal Lapin, wasn’t it?" "He gives Pets Blessings at San Giovanni dei Fiorentini," shouted Lapinette. The Wabbit narrowed his eyes and peered into the distance. He saw a flash of red and used his special glasses. Yes, there he was - Cardinal Lapin himself, nodding benevolently as the 400 Rabbits raced to save the cats of Rome.
at November 08, 2012