The Wabbit and the Hallowe'en Wand 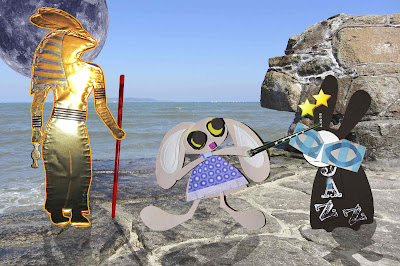 Lapinette and the Wabbit had been for a hop on the beach. They were idly chatting when Lapinette suddenly produced a magic wand from behind her back and waved it around. “Look what I found," she chanted. "It has a little button and when you press it, the wand makes a zingy note." The Wabbit look nonplussed. "Don’t press the button," he advised. "You always press buttons," said Lapinette. "I have a feeling in my fur," replied the Wabbit, "don’t you remember what day this is?" "It’s Hallowe’en," chortled Lapinette, "when all manner of strange creatures are abroad." "Apart from us?" quipped the Wabbit. But Lapinette waved the wand again and just as the Wabbit reached out to grab it, she pressed the button. "You see, nothing happens," said Lapinette. "Behind you," groaned the Wabbit. Lapinette grinned. "I'm not falling for that one, that’s the oldest trick in the book." "Humour me," said the Wabbit. "No, no, no!" cried Lapinette and she tapped the Wabbit on the head. Stars flew from the wand and it made a most lyrical sound. “Oooh," said Lapinette, "that sounded Egyptian." "I dare say," said the Wabbit and he stared at a point behind Lapinette’s head. "Waaabbit!" boomed a voice that echoed from the rocks. "You are invited to an audience with Unut, Rabbit Goddess!" "Cute trick Wabbit! said Lapinette, "you can throw your voice so well." "The Dark Basement of the Goddesses, tomorrow morning!" boomed the voice. "Oh, you’re always joking," said Lapinette. "My diary needs adjusting," sighed the Wabbit.
at October 31, 2012