2. The Wabbit is Thrice Briefed 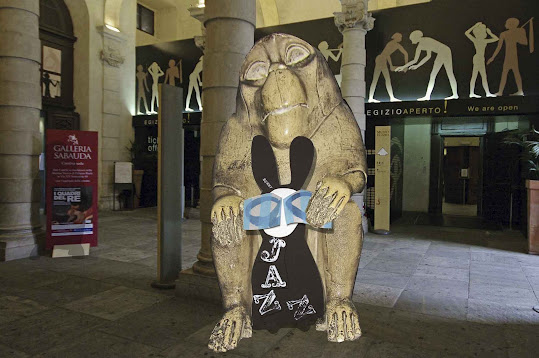 Thoth was a God who was thrice great - and he knew it. But he liked the Wabbit and spoke in a friendly voice. "Thrice hello Wabbit!" The Wabbit leant back against Thoth's imposing frame  "I’ve come for my briefing," he said. "Well, you’ve come to the right God," said Thoth, "because I can both name and describe the enemy who want to expel the Roman cats from their ancient home." The Wabbit looked up and listened. "The enemy are called the Normots and they are thrice normal." boomed Thoth. "Thrice normal!" breathed the Wabbit in horror. "Yes," confirmed Thoth, "they are very sick indeed. They have no subjectivity and move themselves as objects in a world of objects." The Wabbit, who had trained in analytical psychology in Geneva, nodded gravely. "Then they are most dangerous," he said, "because they recognise no feelings of their own." "Thrice correct Wabbit," said Thoth." But they observe feelings in others and copy or steal them. They are therefore stupid yet cunning." "Mmmm," said the Wabbit. "Shall we confront these Normots?" "Hah Hah Hah!" boomed Thoth. "They may not even understand your purpose and that is thrice to your advantage." The Wabbit shook his head. "Do they know we’re coming?" he asked . "Of course not," said Thoth, "They are many, but they don’t know whether they’re coming or going." "Yet they know enough to organise this expulsion," observed the Wabbit. "They watch television," sighed Thoth.
at November 05, 2012