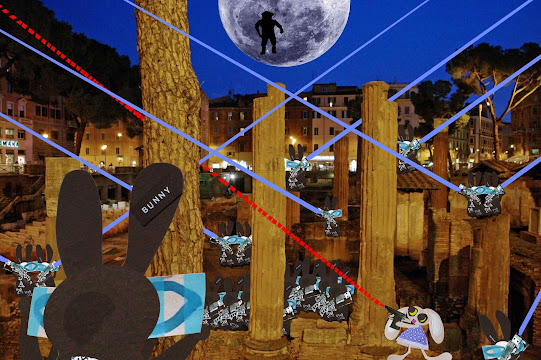 They waited until nightfall when the Largo di Torre Argentina was deserted. Then the 400 Rabbits swept in without effort to seize the space. Soon every nook, cranny and crevice was alive with armed rabbits. The Wabbit looked down from the wall until the rabbits assembled and then he waved his paws around in a very special way. Instantly, the shadow of a man appeared on the moon and the 400 Rabbits let forth a low, menacing growl. "400 Rabbits!" shouted the Wabbit. Every pillar echoed to the hum of charging snaser guns. "Let them know we’re here!" yelled the Wabbit. Lapinette repeatedly fired her automatic in the air and gave forth a warbling, blood-curdling scream as a round of tracer bullets sliced through the night. The 400 Rabbits immediately raised and fired their weapons. And as the sky glowed with blue light from their snasers, they too screamed with such intensity that it hurt the Wabbit’s head. But all across the city, cats’ ears pricked as they heard the frightening sound. They looked at each other and nodded, then one by one they started padding towards the old ruins that were rightfully theirs. There was to be no sleep for anyone in Rome that night. "Our enemies left the space clear," muttered the Wabbit. "They will regret their error." He watched as some of the 400 rabbits danced a war dance through the ancient temples, threading their way through the pillars and singing lustily. "Hey Lapinette!" he called. Lapinette looked up. "Whatever happened to Saturday night?" asked the Wabbit.
at November 15, 2012