The Wabbit & the Goddess Debriefing 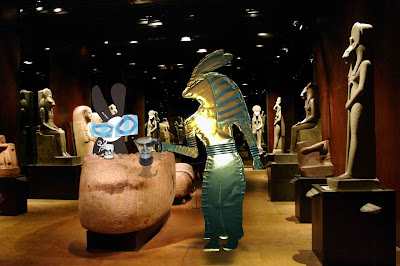 The Wabbit suddenly found himself in the Dark Basement of the Goddesses and he was indeed in his own fur. So he shrank back as Unut bore down on him. "Commander!" said Unut. "Your Goddess Highness-in-charge," trembled the Wabbit. "What was that for a sort of mission?" asked Unut. The Wabbit was silent. "I will tell you," said Unut. "First there was the rabble rousing rally." "Yes," acknowledged the Wabbit. "Then came the show-off pyrotechnics," growled Unut. "Mmm," said the Wabbit. "And after that, there was the sarcastic sermon," sighed Unut. "I suppose so," muttered the Wabbit. Suddenly, Unut leaned back and smiled a broad smile. The Wabbit looked up hopefully. "Skratch the Cat Burglar was exemplary in every department and conducted himself with aplomb," she said. "Oh yes?" brightened the Wabbit as Unut continued. "And for this reason, Bastet, Cat Goddess is extremely pleased. "Oh everything’s fine then?" said the Wabbit. "Everything’s finally fine," said Unut. "So may I offer you a coffee?" "A mug for me," gasped the Wabbit. "This turn of events is fortunate, my Emissary," said Unut, "because otherwise I would now owe you two whole favours." The Wabbit raised a querulous eye at Unut’s striking frame as she continued. "But Bastet now owes a Goddess favour to Skratch the Cat, "so I only owe you one and a half favours." The Wabbit was relieved. "I’ll have the half favour now," he grinned. It was Unut’s turn to raise an eye. "I’ll take another pot of that coffee," said the Wabbit.
at November 26, 2012