8. Skratch stands in the Way 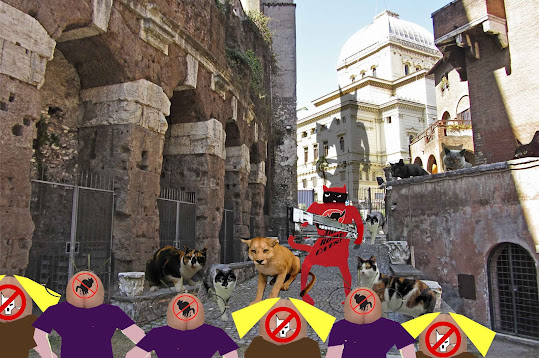 The Normots fled the Largo di Torre Argentina and the 400 Rabbits. But they ran straight into the paws of Skratch and his entourage - and found themselves bottled in a narrow passageway. "Let us through!" they cried. "You're all under arrest,” said Puma, who had loped straight from the railway station. Skratch leant close to Puma and in a stage whisper asked, "What is the punishment for cat harassment in Rome?" "Death," growled Puma. Skratch knew Puma was prone to exaggeration, but he let it stand and watched as the Normots tried to think. "Save us!" shouted the Normots. "We’re obliged to take you to Commander Wabbit who will decide terms for your surrender," purred Skratch. "No, no," wailed the Normots, "he’s mean and nasty." "Oh I know," said Skratch. "But he can’t help it. Now turn around." "What will we do?" cried one Normot. "Feel ashamed," suggested Skratch, "feel very ashamed." But the Normots didn’t know how to feel anything. "Well at least look ashamed," added Skratch. The Normots gazed at each other with blank eyes. "Try looking at the ground and shuffling your feet," he suggested. "Does that work?" whispered Puma. "No, but it will be fun to watch," murmured Skratch. The Normots wheeled around reluctantly, but one turned back. "Shall we appeal to the Wabbit’s better nature?" All the cats started to laugh. "He hasn’t got one," said Skratch.
at November 19, 2012