9. The Wabbit takes the Surrender 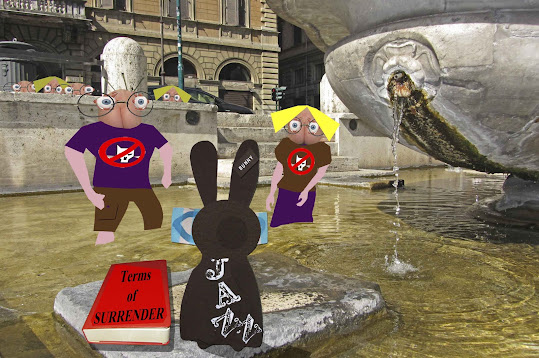 The Wabbit addressed the two Normot delegates who had been pushed to the front. "Please sign the terms of surrender and return them to me." The Normots shivered in the water. "Sign!" growled the Wabbit. "Are you going to kill us?" asked the first Normot. "I’m a rabbit not a monster," smiled the Wabbit. "It says on the television that we shouldn’t sign things," they said together. The Wabbit grinned. "I was on television," he said and he flicked an imaginary speck of dust from his coat. "I was on Island of the Famous." Both Normots looked in awe and their mouths dropped open. "I want to touch your fur," said the second Normot. "That would be a start," replied the Wabbit. The Normots looked blank for a long time and the Wabbit hopped up and down. "You must love the cats," he hissed. "But they’re inappropriately sited," said the first Normot. "They poo," said the other. "Embrace chaos and love the cats," said the Wabbit. There was silence. "Repeat after me, “We embrace chaos and we love the cats”," shouted the Wabbit and he stamped his foot. "I don’t know how," moaned the second Normot. "Chaos was on the Discovery Channel," advised the Wabbit. The Normots looked at each other and nodded vigorously, again and again. "Then we’ll try," they shouted. "We embrace chaos!" "You see how easy it was," smiled the Wabbit with a wicked grin. "Yes!" they cried with delight. "We don’t mind cat poo now and we’ll pick it up and eat it." The Wabbit slapped a paw to his head. "This isn’t Bear Grylls," he sighed, "and they’re felines not lagomorphs."
at November 21, 2012