5. Skratch of the Advance Guard 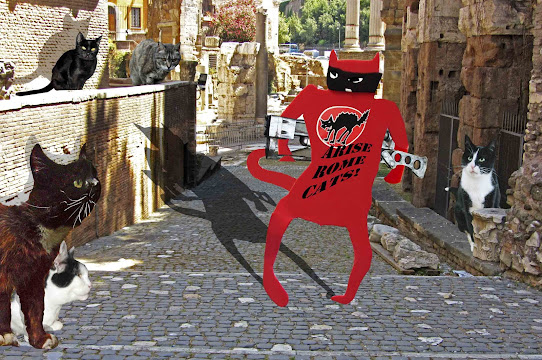 Skratch carefully skirted Largo di Torre Argentina and the Normots, then prowled through the ruins behind the Roman Ghetto. "Meow!" said a black cat on the wall. Skratch turned abruptly and rattled his weapon. "I didn’t get as far as I've come today, by meowing," he said sharply. "Exactly how far did you come, Mr Skratch?" smiled the large red-flecked cat on the road. Skratch casually slung his snaser gun across his back and proffered a paw. "Antiquicat I presume? I have a message from the Wabbit," he said strictly. "How is the Commander?" said Antiquicat. "Furious," said Skratch. "He said to wait for his signal." "What will that look like?" asked Antiquicat with a faint smile. Skratch paused because he hadn't been told, then shrugged his broad shoulders. "Oh you know the Wabbit," he said. "Probably he’ll wave his paws around and make a shadow of a person on a wall." "I already owe him a favour," said Antiquicat. "You can buy him lunch later," said Skratch. "Why can’t we just find a new home?" said the cat near the wall. Skratch wheeled round. "You’d miss the shops," he growled and turned back. "Listen up, fellow felines, the Rabbits will take back the territory and hold it for your return." "What then?" asked Antiquicat. "You and the rest of the cats will replace them, while we pursue and confine your enemies." "Rabbits, plural?" queried Antiquicat. "The Wabbit brought his private guard," said Skratch.  Antiquicat’s eyes widened. "I almost feel sorry for the Normots," he murmured. "The 400 Rabbits will deep fry their pizzas," nodded Skratch.
at November 13, 2012