3. The Wabbit gives the Order 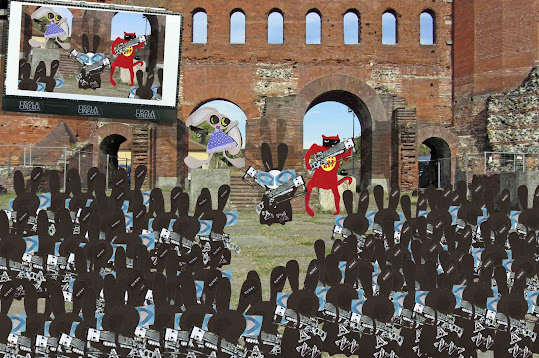 Lapinette had readied all the Wabbit’s private guard and they waited at the Palatine gates to do his bidding. "Do your thing, Wabbit!" said Lapinette and she fired her automatic four times in the air. The Wabbit hopped forward with a clatter of armoury. "How many are you?" he yelled. "We are the 400!" came the reply. The Wabbit paused for effect. "And where are we?" he shouted. The 400 rabbits shouted as one. "Turin, the old capital!" "So where are we going?" screamed the Wabbit. "Rome!" they scoffed. The Wabbit looked over his shoulder at Lapinette and grinned. Lapinette frowned at the Wabbit. "They’ll do anything you say, so don’t make jokes," she hissed. The Wabbit turned back and raised a paw. "What is our motto?" "Out of our way," they yelled. "And what of our enemy?" "Already vanquished!" they roared and the ground shook under their paws. The Wabbit tuned to Skratch. “So far so good,” he murmured. "They’re scary," said Skratch. "Are you sure you have them under control?" "Just watch," said the Wabbit and he yelled "Ale' Toro!" "Ale’ Toro!" they screamed. "Stamp the grass and scare the snake!" shouted the Wabbit. This time the 400 waited silently. "Sweep through their territory," he yelled. The 400 assembled into formations and formally hopped forward. "Better get out their way," said Lapinette and the Wabbit leapt aside as they crashed through the gates. "Where did you get that screen?" asked Lapinette. "Borrowed it from Cinecittà Roma" said the Wabbit.
at November 07, 2012