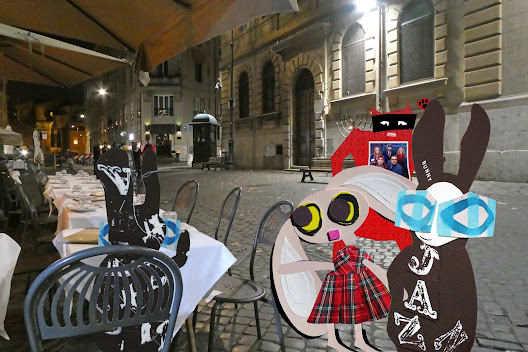 The Wabbit and Lapinette hopped through the old Roman ghetto where they'd arranged to meet. The Wabbit wanted Jerusalem artichokes and he knew he'd find the best ones there. Wabsworth beat them to it. He'd claimed a table and waved at everyone. "Best restaurant, best seat," he exclaimed. Skratch brought up the rear and finally caught up. "What was that for sort of adventure?" he meaowed. Wabsworth got into the spirit early. "It was an exercise in horrality," he said. "The unexpected duck is liminal in its bodily state and the interaction with Ancient Egypt seeks to titillate the audience with a comedic yet intimate apocalypse." Skratch purred long and hard. "Horrality?" he repeated. "Some words and things need to be invented for what has to be said." Lapinette grinned. "I have a problem with dislocating our story from its generic overtones." The Wabbit was not to be outdone. "I would say the genre is over- saturated." Wabsworth nodded. "The fascistic continuum of fiction!" he ventured. "That's Philip Brophy," said Lapinette, "and I know that some textuality is bound up with over-saturation." Skratch urged caution. "Textuality is hilarity," he hissed. "Don't look up," said the Wabbit, reading Skratch's t-shirt just out of the blue. Everyone turned. "Do you think that Rufflesmuck Duck could be a science fiction horror cult?" asked the Wabbit. "I believe he has his admirers," replied Wabsworth. "I'm thirsty," said Lapinette. "And I'm hungry," added the Wabbit. They sat down beside Wabsworth. "What's on the menu for cats?" asked Skratch. "Gefilte Fish," laughed Lapinette.
[Many thanks to Philip Brophy for inspiration.]
at June 27, 2022