5. Tipsy and the craft of the Alien Duck 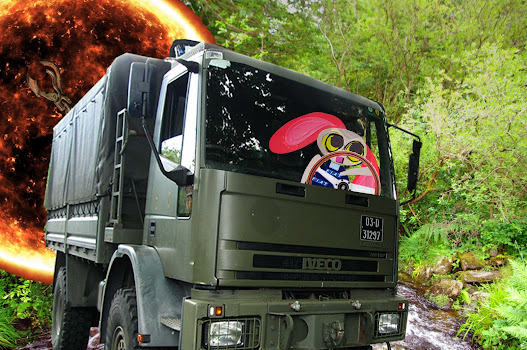 Tipsy made it look easy but it was far from that. She took a grappling iron from the back of the truck and threw it at the Duck's craft. The craft was still cooling down but there was enough for a good grip. The embers closed around the hook and it fastened securely. Then she put the truck in gear and engaged the engine. The craft gradually rose from the cliff and started to roll along nicely. Tipsy then took the scenic route down the mountain and dragged the craft along a river.  She put her foot down and mused to herself as she rolled along. "I hope for the Wabbit's sake that this all works." She nodded and admitted it usually did. The truck bounced along the river bed. The craft bounced behind. She hummed a merry tune about ducks. "He once was an ugly fluckling, feathers all flocky and brown. The earth people said in so many words. Just get the fluck out of town." Water sprayed on the windshield as she coasted along the river. She switched on the wipers. Nothing happened. "Sloppy Maintenance! Sard off you pizzling gnashgabs!" yelled Tipsy. Up ahead she could see the Tiber towpath that took them straight into Trastevere. Strictly speaking it wasn't for traffic, not even army trucks. But Tipsy slewed the wheel and headed downriver. She looked in the mirror. The craft was still there, a little cooler than before. The old power station came into sight. Tipsy thought of a joke to tell the Wabbit. "Now you'll reach enlightenment." She thought better of it. The Wabbit was the only one allowed to tell terrible jokes. She smiled to herself and turned the truck and its cargo into Centrale Montemartini.