1. The Wabbit and the Fake Facade 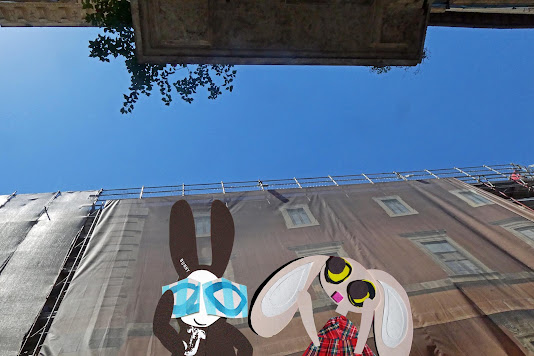 The Wabbit looked up. So did Lapinette. "Not going very quickly are they?" said the Wabbit. "On the balcony?" asked Lapinette. "Across the street," replied the Wabbit. Lapinette wondered whether the Wabbit was going for Old Age Pensioner status. "I expect the workers are all inside, beavering away," said Lapinette. "No," said the Wabbit, "They're all inside that bar, eating sandwiches." His tummy rumbled. "You're hungry," smiled Lapinette. She called for a waiter to bring a salad sandwich. The Wabbit nodded but he didn't give up. "We were here three months ago - and it was exactly the same." Lapinette grinned. "Some day we'll come here and it will be all finished." "Just like that?" asked the Wabbit. "Just like that," replied Lapinette. The Wabbit launched into a catalogue of dislikes which included bed and breakfast, fast food on bicycles and taxi services run by everyone and anyone. "We can't stand in the way of progress," sighed Lapinette. "I don't like the rigged economy," grumbled the Wabbit. "Gig economy!" shouted Lapinette. The Wabbit stopped winding Lapinette up. He shoved his paws in his fur. A cyclist bearing the legend Get Stuffed brushed against his back. "I rest my case," he said, "Let's eat in a proper restaurant." "It's only 11.am," said Lapinette. But there was no dissuading the Wabbit, even if he did have a sandwich. Lapinette tried to distract him. "What's our next Adventure going to be?" The Wabbit paused and grimaced. "A decent adventure!"
at June 13, 2022