2. The Wabbit and the Gears from the Sky 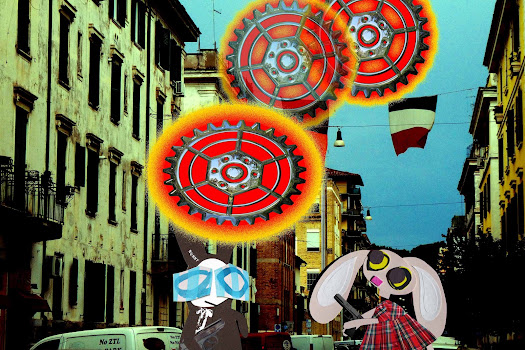 The Wabbit was telling Lapinette about the gear wheel incident when it happened again. They were different gears, but gears nonetheless. They emitted a strange colour that bathed the city in an eerie post nuclear glow. Then they began to descend. The Wabbit and Lapinette both took out automatics and prepared to fire, but the gears didn't do anything. The Wabbit was furious. "They should do something," he raged, "Anything." Lapinette grinned. "They're the Hipsters of Gear World." The Wabbit was not impressed. "You've been reading too much Terry Pratchett." "That's Disc World," replied Lapinette. The first gear descended until it touched the Wabbit's face. "Get off!" yelled the Wabbit. He swiped at it. The second gear followed it down until it too touched the Wabbit. The third gear stayed above. "Soon we'll have enough for a whole gearbox," sulked the Wabbit. "They're shifty," nodded Lapinette. The first two gears began to ascend and they both merged with the remaining gear. Then they began to spin in opposite directions. They started to fade - and finally they vanished. The Wabbit shoved his automatic back in his fur. "They're infuriating." The city regained its proper colour and they both breathed easily. "You say they did this before?" asked Lapinette. "Yes, at the bus stop," huffed the Wabbit. Lapinette paused. "They never got out of second gear." The Wabbit thought for a long time. "Clutch problems?" That gave Lapinette an idea. "They don't have a reverse gear. They're stuck." The Wabbit threw back his head and laughed. "So there's no going back."
at June 01, 2022