4. The Wabbit and the Relentless Gears 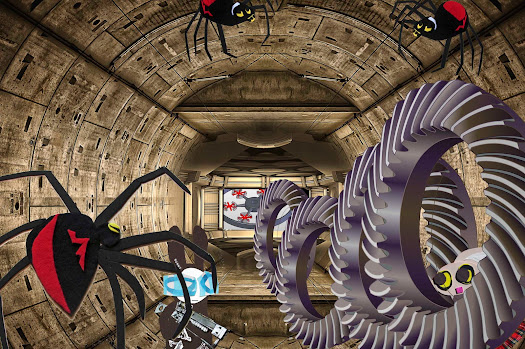 The Wabbit and Lapinette arrived with the only shaft passer they could muster. It was a purely hypothetical device which allowed a spoked wheel to rotate despite having a shaft passing between its spokes. Since it was Marshall Duetta's idea, the Wabbit was clueless for once. But Duetta thought the shaft could be employed when the Gears went into reverse. The Wabbit was sceptical. "These Gears haven't got spokes." Duetta vibrated. "They're on their way to an assembly yard, They'll marry up with the spoked wheels there. Then they'll locate and strike." As the Gears progressed through towards the gateway, Lapinette waved from the back. "They seem harmless." Duetta rattled her legs. "It's all operated remotely from a planet light years away. Nothing happens until after assembly and the job is complete. Then they will harvest our world by remote." The Wabbit tapped a Gear as it went by. It gave off a hollow sound. "I don't suppose a kaboom would destroy them?" Duetta laughed. "They'll just replicate. Our only hope is to alter the mechanism when it's underway." They watched the Gears make their way into space. He shook his ears. "If anyone can do it, we can." Lapinette shook a fist. "We'll shaft them and we'll shaft them good." The Wabbit knew all about shafts and torques and speed and he laughed. "Let them build their gear box." Lapinette laughed too. "What do you do with an enemy that has problems engaging?" "Rev the engine and slip the clutch?" grinned the Wabbit.
at June 06, 2022