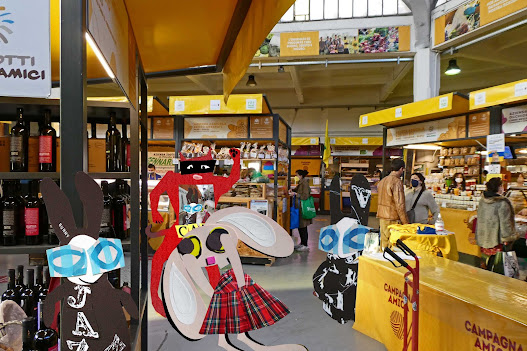 The team assembled at the Campagna Amica food market to go to the Caffè there. The Wabbit got there first and thought he would surprise Lapinette. He sidled behind a display of olive oil. "Boo!" he shouted. "Boo yourself," said Lapinette. She'd been there a while and had noticed the Wabbit hiding. Wabsworth hove in sight. He grinned. "You can't catch Lapinette out. She's too cute." Skratch meaowed from the back. "You don't get cuter." "Aw shucks," simpered Lapinette. The Wabbit sighed and gave up. "OK Skratch. You tell us what sort of adventure that was." Skratch meaowed and meaowed. "It was the most awful twaddle - but entertaining nonetheless." Wabsworth shook his head. "It was intelligible through meaninglessness, thus defining it as science fiction." Lapinette span around in a pirouette. "That's good coming from an advanced android such as yourself." "I'm not advanced, I'm state of the art," grumbled Wabsworth. "What art is that?" said the Wabbit. He nudged Lapinette. She pointed at Wabsworth. "He certainly looks the art." Skratch was not impressed by this tomfoolery. He got back to the subject. "Aliens are our default arch enemies. But are they not representations of ourselves and all our faults?" Wabsworth whacked his fist on a nearby table. "We never actually see the aliens. They are merely inferred through disembodied voices off." Skratch purred long and hard. "They are posited through absence. Nearly all Science Fiction uses that technique." The Wabbit grinned. "I'm feeling the absence of a glass of Prosecco!" Lapinette rose en pointe and sidled to the right. "Walk this way!" So they all rose on their toes and followed her to the bar.