5. The Wabbit and the Doomsday Gears 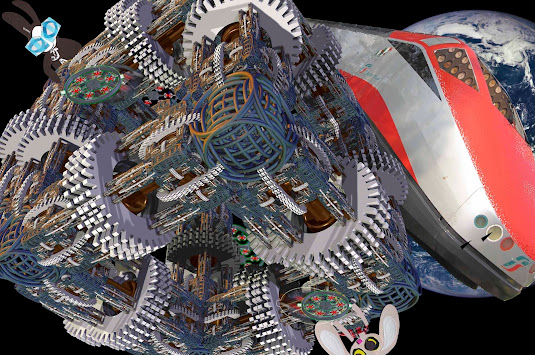 Quantum took them to the spot designated by Marshall Duetta. Duetta didn't come because that was a job for the Wabbit and Lapinette - and the truth was that they enjoyed it that way. The Gear Machine was assembled and clearly ready to shift. The Wabbit and Lapinette drifted through space bearing the shift passers. They took up positions on either side of the machine and watched the gears as they tried to throw the Earth irreversibly into reverse. The shift passers did their work. The gears span forward and on - and out of control. They began to separate. The machine began to disintegrate. Gears flew to right and left - if indeed there was a right and left in space. "Time to go," said Lapinette. Quantum pulled up alongside and took them on board. With a supersonic bang he put distance between them and the gears - and threw up a force field protecting Earth. "I thought you didn't have a force field, Quantum," muttered the Wabbit. "You're not the only one who attends night classes," quipped Quantum. On a planet light years away there was fury. There was talk about years of planning gone. People had been hired. Work had been done. Yet they had accomplished precisely nothing. "We'll get that Wabbit for this," said an alien. "How many years will that take?" said another. "Just as many as it takes," said another. The cry went up. "Kill the Wabbit! Kill the Wabbit!" Back on board Quantum, the Wabbit and Lapinette calmly sipped Proseccos. "Do you think they're annoyed?" giggled Lapinette. "Perhaps mildly put out?" suggested the Wabbit. "Maybe they should get a life!" said Quantum. Then they laughed and laughed and laughed.