3. Marshall Duetta and the Gears of Space 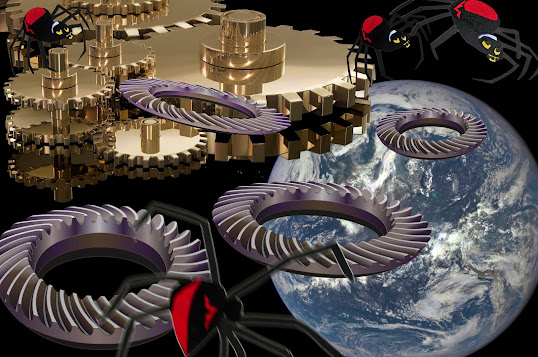 Far away and unbeknown to the Wabbit and Lapinette, a gearwheel platform appeared in Earth's outer atmosphere. It sat there for a while before anything happened. Then with a whoosh, several satellite gear wheels appeared. They zoomed around like bees round a hive and started to chatter with each other - and with the mother gear. They spoke of Distant Lands and their Arc of Approach. They spoke of Thickness and Backlash. Most of all they spoke of Contact. It sounded like gibberish. But not to Marshall Duetta Spyder and her army of red spyders. They landed on the platform like the predators they were. They understood every word and communicated telepathically to one another. "Land on them," commanded Duetta. "All of you reduce size, make a landing and pretend to be non-threatening spider colonies." Her spiders obeyed and soon the space gears were crawling with tiny but lethal spiders. "Monitor their comms," commanded Duetta. Soon Duetta knew what they were up to. They were planning an invasion of earth and planned to put it in reverse gear. Forever. Duetta was a little distant from the Wabbit to speak with him telepathically, so she pulled a radio from beneath her abdomen. "Commander. Emergency. Code Red." Far off on Earth, the Wabbit's radio crackled. He knew who it was by its special buzz. He pulled it from his fur. "Marshall?" Duetta Spyder's vice was urgent. "We have a situation, off-planet." There was a brief silence. "Anything to do with gears?" said the Wabbit. "Indeed," said Duetta. "Come at once and bring a shaft passer."
[Background images: Earth is by NASA. Space platform is by quimono at Pixabay]
at June 03, 2022