6. The Wabbit and a Dynasty of Pharoahs 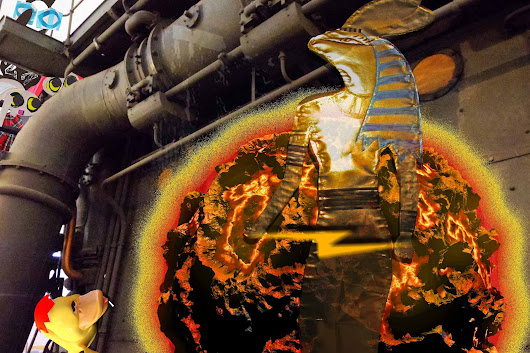 Tipsy positioned the Duck's craft and vanished up a flight of stairs to start the engine. But before she could do a thing the craft began to change. She threw the switches anyway. The outer shell broke its crust. Fissures appeared. Then out of the fiery ball appeared a familiar figure. "Unut!" gasped the Wabbit. Unut raised her paws. A sharp crack sounded, and a bolt of lightning coursed across her body.  Pieces of shattered shell landed on the duck's head. "Rufflesmuck!" she cried. "Rufflesmuck, you're out of your territory." Rufflesmuck looked crestfallen. "It was an accident!" he yelled. "I've had enough of your accidents, Rufflesmuck. You must return to the Planet Fluck. Forthwith." Rufflesmuck looked at the Wabbit. "I'm sorry to have been any trouble." The Wabbit looked down at Unut with due deference to her Goddess status. Unut looked back up and frowned but the Wabbit shrugged. "He's never a bother, Unut." Unut considered. "If you're so fond of him you can keep him, but he cannot keep this craft. It belongs to the Ancient Dynasty of Pharaohs Chapter 3." Rufflesmuck whispered something under his breath. "I heard that Rufflesmuck!" shouted Unut, "It's not a beat-up piece of junk." Lapinette intervened. "We'll fix it up. It will be good as new." "It was never that great," admitted Unut. She considered for quite a while. "OK she's all yours. But I'll need a receipt." Tipsy produced a notebook and the Wabbit scribbled a receipt. "What shall I put as its value?" "Just make it a thousand QUID," said Unut. "You use these?" asked the Wabbit. "Doesn't everybody?" sighed Unut.