4. The Wabbit and the Mummy in the Box 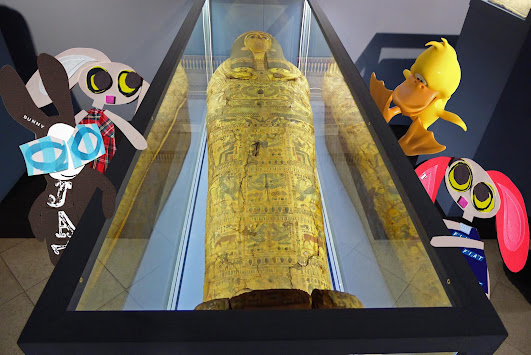 Acting on an inspired guess, the Wabbit took the duck to a museum he knew. The museum wasn't so well known and so it was quiet as the grave. When they came across the mummy in its glass and mirror tomb, the duck jumped in the air in amazement. "Why is she here?" he yelled. Lapinette looked with interest "What is she to you, Duck?" "She is the ancient founder of the Planet Fluck," said the duck, "Is this Valhalla?" The Wabbit shook his head. "This is an old electric generating system in Rome. It was powered by giant engines." The duck jumped higher. "It sounds like Valhalla to me, where they bring the dead. There must be many rooms here." Tipsy stood back, quiet for once. "There are indeed many rooms, named after the engines that inhabited them." The duck wanted to know their names, but the Wabbit knew they were only numbers. "Boiler Room One," he said. "Boiler Room Two," said Lapinette. "Each contains a massive engine of many horsepower," lisped Tipsy. The duck was thoughtful. "Valhalla's magic horses? Perhaps they could power my ship?" The Wabbit thought long and hard. The engines hadn't been used in many years but the Wabbit knew a thing or two about ancient machinery. "Let's have a look at them. See what we can do." The duck settled in reverence beside the mummy. "She doesn't speak much, does she?" They turned to go. "Don't be so sure, Rufflesmuck," said a voice that shook every piece of concrete in the building.