2. The Wabbit and the Unidentified Object 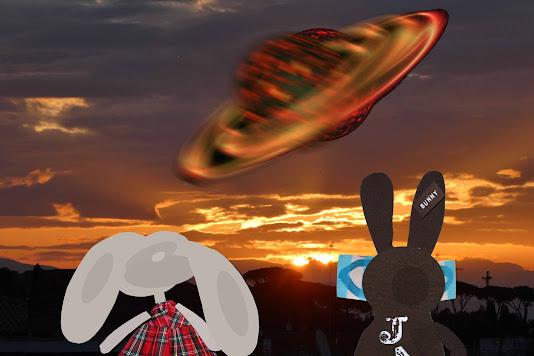 The Wabbit and Lapinette watched the sun rise over the Apennines. They were up early and it seemed like a clever idea. They blinked. A strange object came flashing down and disappeared in the mountains. They blinked again. It was gone. "Did you see that?" asked Lapinette. "I did," replied the Wabbit, "It was a glowing cinder." Lapinette giggled. "A large glowing cinder." The Wabbit hunched and stuck his paw in his fur. "Hard to say, perspective being what it is." Lapinette stood her ground. "I'd say it was an extra-terrestrial object of some considerable dimension." The Wabbit shrugged. "Can't argue with that." Lapinette made a mental note of the size. "It went yonder," said the Wabbit. He pointed, screwed up his eyes and peered into the distance. "Whatever it was and wherever it went, it's doesn't seem to be coming back." Lapinette looked hard. "Is that a fire over there?" The Wabbit could be extremely annoying. "Difficult to say in this light," he said. As the sun rose, the scene lost its rosy glow. They heard a faint boom and saw smoke. "I love the smell of burning in the morning," muttered the Wabbit. "Worth investigating," said Lapinette. "Let's get the truck and reinforcements," snapped the Wabbit. Despite the early hour, they made their way out and across the city. "I hope it's not aliens," said the Wabbit, "I really can't be bothered." Lapinette grinned widely. "They'd be crispy fried ducks by this time." "Crispy fried duck aliens?" suggested the Wabbit. "They're the worst kind," said Lapinette.

[ETO by Buddy Nath at Pixabay]