13. The Wabbit and Artistic License 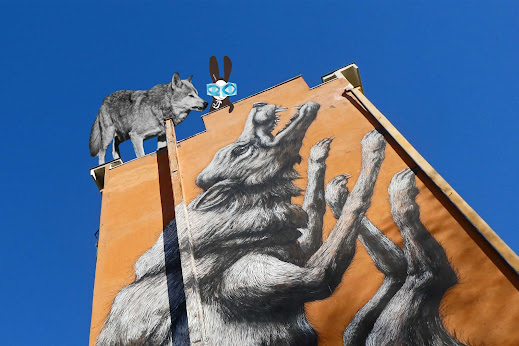 The Wabbit said goodbye to Rommy at Testaccio. They both looked down at the mural. Rommy chuckled. "The ears are too big." The Wabbit hung over the edge of the building and said, "Artistic License." Rommy got bigger. "I'll try to fit in." They examined the mural from top to bottom. "Jaws bigger and teeth showing," said the Wabbit. Rommy obliged. "More swirly fur," said the Wabbit. "Do you like that swirl?" said Rommy. "I do," said the Wabbit. "I'll do what I can," said Rommy. His fur swirled in all directions, and he adopted a ferocious look. "We've got to adapt," said the Wabbit, "it's good for us." Rommy was becoming too large for the top of the building, so he dropped down and merged with the mural. "Grrrrrrrrowl" he growled. The Wabbit laughed. "It's what people expect." Rommy looked up. "You mean the plebs." The Wabbit swithered and considered. "I meant the general public. Try harder." Rommy opened his fangs and growled at the top of his voice. People looked up from the market place. Some of them pointed. "You're popular," said the Wabbit. "I'm a God," said Rommy, "of course I'm popular." The Wabbit grimaced. "It's chancy to rely on only one God. The people can't have enough deities." "Or temples," agreed Rommy. He looked down at Testaccio market. "I think that market needs a temple." "I'll try and arrange it with the local municipality," said the Wabbit, "they've got a new mayor now. The last one hardly moved a fingertip." Rommy was part of the wall now. "I'm peeling. Can you get someone to touch me up?" The Wabbit couldn't help but smile. "Risky," he said, "but you never know your luck." Rommy winked. "I'll wait to hear from you." Then he froze.