12. The Wabbit and the Misjudged Blast 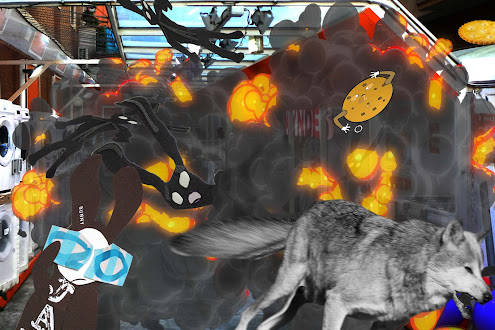 The Agents arrived in droves and descended on the biscuits. That part of the plan worked well. But no one ever knew what caused the blast. It may have been faulty electrics. Maybe the biscuits caused a short circuit. Or perhaps it was the Agents' enthusiasm. But there was a blinding flash and what was meant to be just a trick turned to chaos. Rommy the Wolf had a smile on his face though. Agents hurtled through the air amidst a hail of ginger biscuits. "That'll teach them," said Rommy. He chortled long and hard. The Wabbit was aghast. "That was some Kaboom! Steady on there Rommy." Rommy reached a safe distance, skidded to a halt, and turned round. He surveyed his handiwork. "A good mechanical will sort that out in seconds. I'll get Apollodorus of Damascus onto it! The Wabbit raised a slightly blackened eye. "Wasn't he executed?" Rommy thought for a minute. "Oh yes," he muttered. "He did get into bother. He was one for an offhand quip at the wrong time in the wrong place." The Wabbit nodded sagely - because so was he. He addressed Rommy. "That completes my tour for now." Rommy's face fell. "Don't worry," said the Wabbit, "perhaps I can keep you on for special projects. You'd like the odd per diem, no doubt?" Rommy growled in a happy fashion. "Now you're talking." The Wabbit and Rommy the Wolf strolled off in the Aurelia direction. "Just one thing," said the Wabbit. "No kabooming without my say so."