3. The Wabbit and the Ghostly Gunfire 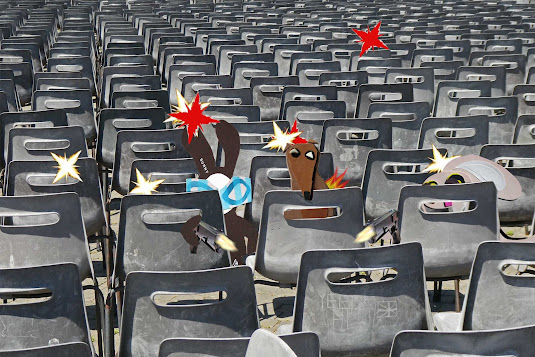 It was just as Lapinette envisaged. They were casually crossing St Peter's Square when they were caught in a barrage of gunfire. They ducked behind chairs and returned fire but couldn't see the enemy. Just faint muzzle flashes. "They're a long way off," shouted Lapinette. Arson Fire belched fire too - but couldn't quite get a bearing and only singed the seats. "Sniper," muttered the Wabbit. "Keep moving," yelled Lapinette, "so they can't get a bearing." They moved along the chairs and back, firing all the while. The shots kept coming. ""More than one," said Lapinette. She scuttled backwards and the fire sprayed out and along. "We're pinned down," said Arson Fire. "Shall I make a run for it? I'm rather fast." The Wabbit glanced back and forth. "Try for the pillars." Arson Fire darted to the pillars, then speeded back. He was a greyhound, and he could run. But gunfire followed him all the way. Chairs splintered. Concrete shattered. A bullet shaved fur from the Wabbit's ears. "I'll get you for that!" he shouted. Lapinette screened her eyes. The sun was fading and she could see silhouettes on the rooftops. "There they are!" But one by one they vanished. The gunfire stopped. Everything went back to normal. Tourists came and went as if nothing had happened. "Think they're are our guys?" asked Arson Fire. "They have to be money ghosts," said the Wabbit. "They're as ephemeral as our gold bullion." Lapinette tucked her automatic into her frock. "They're coming all the same. Arson, can't you remember the name of the dead dictator?" Arson Fire thought and thought. "Cacchio Scarsoni!" he shouted. "That's rude," shrieked Lapinette.