1. The Wabbit and Funds in Transit 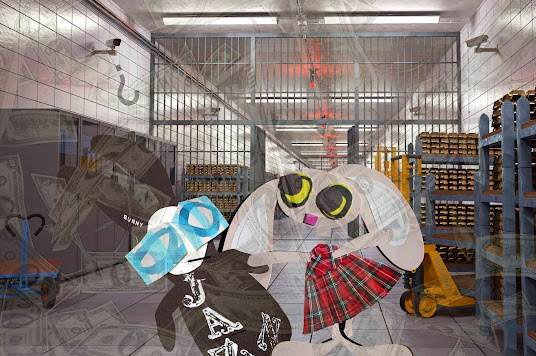 The Wabbit had gone down to the vaults to check on his Dinosaur Fund that funded his more unorthodox missions. Details were kept in the cellars of the Department of Wabbit Affairs in a tiny deposit box. Just a few secret papers specifying where things were at any given time - in overnight deposit in the Post Office in Browne's Bottom, UK for all he knew. That was the way it worked. He'd just glance at the papers, look at the balance and go away. He took Lapinette to ensure no impropriety could be alleged. But he pushed open a door to find something extraordinary had occurred. They both gasped. The cellar contained more gold bullion than they'd ever seen in one place. He shook his head. "Is it dated?" Lapinette shrugged. "Might be a few years ago," She looked under a gold brick. "Yup," she said. "Dated 1977. But it's from the Bank of the Republic of San Serriff." The Wabbit didn't really believe it. He shook his head again. "I don't believe it." Lapinette scowled. She picked up typewritten paper clipped with a treasury tag. "Neither did anyone else. Here's a note to say it's in passage." At that very moment, a dollar bill fell from the ceiling, followed by several more. They were deluged with bills. Lapinette waved the notes. "This is a bill of lading. There are two other notes. A policy of insurance and an invoice. And here's the payment." The Wabbit tripped over Lapinette's feet and nearly measured his length on the floor. "Then everything is here, but nothing went anywhere." "Or rather it eventually arrived here," said Lapinette. "In the Department," said the Wabbit. "Yesterday," said Lapinette. "Where's it been?" asked the Wabbit. Lapinette shrugged again. "Nowhere?" "So we're in the money?" asked the Wabbit. Lapinette drew a sharp breath. "The Dinosaur Fund is in the money..."
[Background Picture: Mathias Wewering, Pixabay.]
at May 09, 2022