4. The Wabbit and the Temporal Force. 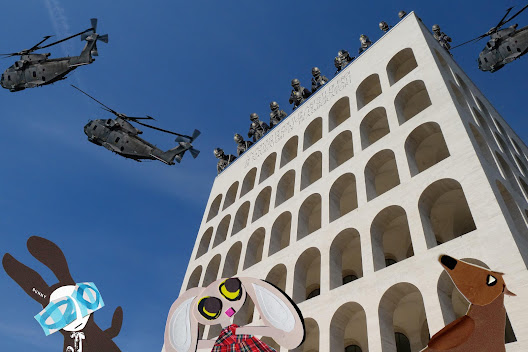 Voices called down to them and they froze. All except for the Wabbit. Their tone was stentorian. "Drop your weapons. Drop your weapons. This is not a drill. This is not a drill." The Wabbit was matter of fact. "They're not real. Nothing is real." The voices shouted again. "Return the money, give us the money. Or you will be terminated." The Wabbit spoke again. "These are robots. Robots." At the same time three helicopters rose into the air and hovered above them. "Drones," said the Wabbit. "Giant drones." Lapinette became exasperated. "Do you have to say everything twice?" "Twice?" asked the Wabbit. ""Grrrrr," growled Aron Fire. The Wabbit waved up at the soldiers and made a rude sign. They stepped back and one by one they vanished. "Told you," murmured the Wabbit. "They're not ghosts, they're controlled remotely." Lapinette shrugged. "They don't seem dangerous." The Wabbit shrugged too. "I think they are very dangerous, but not as we know it. They're controlled from a different temporal zone." Arson Fire was sceptical and woofed once. Sarcasm dripped from his voice. "You seem very knowledgeable, Wabbit." Lapinette was quick to set him straight. "He knows about weird stuff like that." The Wabbit nodded. "They're where the money comes from. They're trying to get a fix and the next time they'll do it." Lapinette looked pensive. "Will our trick still work." The Wabbit grinned. "It will for a while - by which time we'll have altered their time zone." "How do we do that?" asked Arson Fire. "With clocks and greasy butter," replied the Wabbit.