7. The Wabbit and the Notional Monies 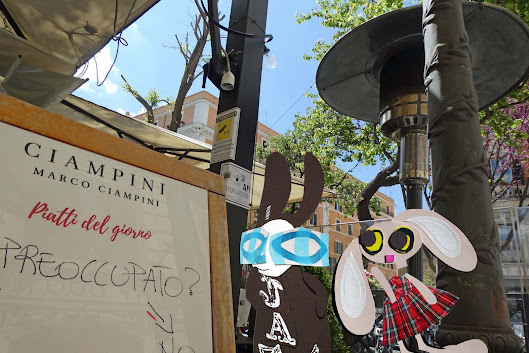 The Wabbit and Lapinette tumbled gently down (or was it up?) at an Adventure Caffè. Arson Fire was taken short, and had gone to find a friendly tree. The effects of the Black Hole hadn't worn off and they were only now reassuming their normal size. The Wabbit looked at the sign. It asked whether he was worried. "I'm always worried," he grinned. It was an advertising poster for a Caffè. No matter where the customer started, they always ended back at the same answer - to have an aperitivo, and always there at Marco Ciampini's place. Lapinette laughed. "What are you worrying about now?" The Wabbit didn't hesitate. "I'm worried about my Dinosaur Fund. Now it's got nothing in it." Lapinette thought that was very funny. "There's always something in it." The Wabbit nodded. He knew at that very moment, overnight deposits across the globe groaned with money from his funds. "I'm never very certain it's there," he said. "I can't put my paws on it. It's always notional." Lapinette pirouetted and with a flash of her eyes ordered drinks from Marco, "Now we won't be worried." "You're never worried," grumbled the Wabbit. "Not true," replied Lapinette. "I worry about you and what you get up to." The Wabbit was appalled. "Me? I don't get up to anything." Lapinette gently reminded him of the time he became locked in a left luggage locker in a misguided attempt to catch a burglar. And the various things he invented in his shed that didn't quite work. "These were all accidents!" he gurgled. Lapinette smiled. "You have a lot of accidents!" The Wabbit huffed and puffed and struck a pose. "Like chance, accidents only favour the prepared mind!"