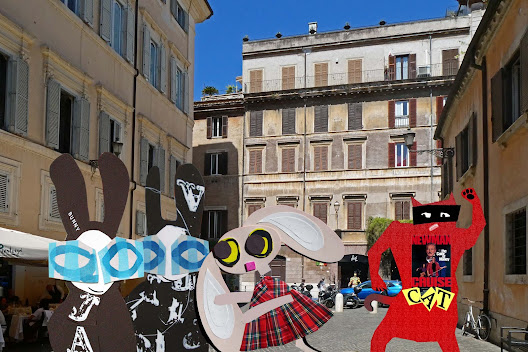 The team gathered at the Piazza de' Ricci in Rome's bustling centre. The Wabbit had booked a table at Pierluigi's famous restaurant, so they knew they were in for a treat. "Been here since 1938," announced the Wabbit. "Did you really wait that long?" said Wabsworth with a smile. "Of course not," snorted the Wabbit, "I meant it was established in 1938." Wabsworth grinned. "With all your travelling in time, you never know." The Wabbit was about to lay out a small fortune on wine alone, so he kicked Wabsworth in the shins. Wabsworth was an android and felt nothing. Lapinette snickered. "Hello," shouted Skratch. He was late and made his usual entrance. "What was that for a sort of adventure?" The Wabbit clasped Wabsworth round the shoulders and said, "It was all about the money." Wabsworth took him at his word. "You mean it wasn't about the money!" Lapinette was feeling left out. "I think it's that money that's paying for this." The Wabbit burst out laughing. "Old money is paying for the restaurant. Very old money." Skratch laughed too. "Money stories don't strive for credibility." Lapinette was sanguine. "The money-grubbing influence of capitalism is always incredible" Skratch nodded. "Money is all pervasive. It's hard to avoid. But your story is strictly for the gullible, I'm afraid." The Wabbit felt in his fur for his cash because he could see the restaurant was getting the table ready. "I seem to have left my wallet at home," he said. "Don't worry," said Wabsworth, "I have it here." He'd been watching pickpocket films and had expertly extracted the Wabbit's money. He searched for his wallet in his fur, but it wasn't there. The Wabbit waved it aloft. "I took it back," he laughed. "That'll cost you, Wabsworth," said Lapinette. "You're getting the wine."