2. The Wabbit and the Numismatist 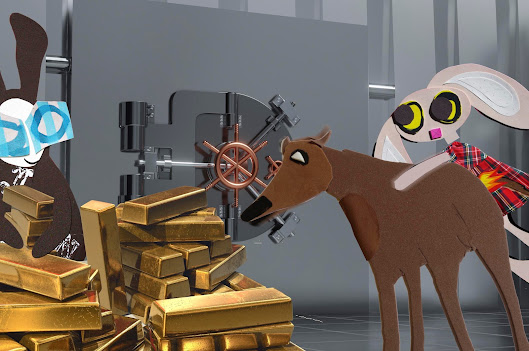 The Wabbit decided to take the gold to a safe place. There it would rest in his account. But as he began to move it, who should stroll in but Arson Fire the Greyhound. He seemed annoyed. Lapinette soothed him with a strong paw. "What are you doing with my gold?" he said. "Your gold?" echoed the Wabbit. "Yes, my gold," said Arson Fire gruffly. "I'm confused," murmured Lapinette.  Arson Fire's head nodded. "It's my hobby," he said. "I became a numismatist." The Wabbit smirked. "I've heard that one before. Confess!" Arson fire looked a bit shamefaced. "After our last adventure, I kept an eye on the Dinosaur Fund and I spotted some strange transactions." Lapinette laughed. "So you decided to make a collection?" Arson gnashed his teeth. "I deprived a few dictators of their ill-gotten gains." The Wabbit shrugged. He pulled a notebook from his fur, scribbled a receipt and passed it to Arson Fire - who ate it. "Which dictator?" Arson Fire barked twice. "I can't recall. I think he's dead now. So, the gold is mine, isn't it? It's worth six times what it was. I balanced the books and I get to keep the rest." Lapinette shook her head. "That's not the way it works. Someone is looking for this and they could be rather unpleasant." Arson Fire growled. "The dirty dogs!" The Wabbit stomped up and down, which he sometimes did when he was thinking. "We'll wait for them to show up." "And then?" said Lapinette. "We'll trick them!" Lapinette scowled. The Wabbit tried desperately to think of a trick and knew there was paper mache and gold paint in his shed. "We'll give it back." Lapinette knew exactly what the Wabbit had in mind. "Remember the Golden Rule." Arson Fire laughed. "The dog keeps the gold."