5. The Wabbit and the Tipping of Time 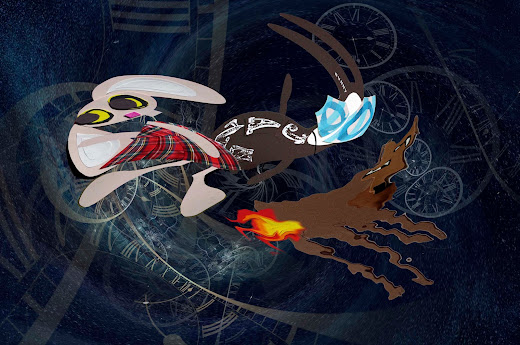 The change was as dramatic as it was sudden. Lapinette, the Wabbit and Arson Fire were all seized by an overwhelming force which tipped them backwards in time. No too far, but far enough. Clocks drifted across their vision, warping them into unbelievable shapes. Arson Fire was the worst affected. Fiery flames erupted from his bottom and narrowly avoided burning the Wabbit. "Yikes!" shouted the Wabbit. His voice slipped into the vortex. He could see it see it change shape. It solidified, then vaporised like the flaming fart from Arson' Fire's bottom. Lapinette yelled. "Where in time are we going?" The Wabbit watched hands whizz round on the misshapen clocks. Then he watched them whizz back. Sometimes they blurred. Sometimes they crawled. He muttered. "The devil's whipping us round the stump." The Wabbit was given to weird expressions. Arson Fire barked three times. "Well we won't pay for his time." Lapinette wasn't going to be outdone. "The devil speaks of time but I think time speaks of him." A rasping voice called in the darkness. "Where's that gold and where's its money?" They span faster but the clocks appeared stationary. The hands settled at 12.00. Something tried to move them on - but they refused to budge. They groaned like the pit and the pendulum. "I want the money," screamed the voice. The Wabbit felt in his fur and produced a safe deposit key. "Safe and sound," he said. "Under lock and key." The clocks reversed and the hands span in the opposite direction, faster and faster. Then, with a flash of blinding light, the Wabbit, Lapinette and Arson Fire found themselves deep in a concrete vault.