The Wabbit at his famous Adventure Caffè 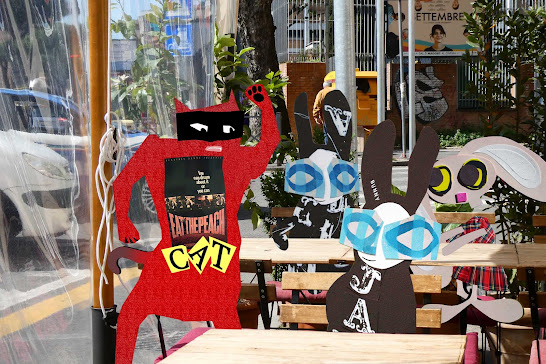 The Wabbit arrived first at the Adventure Caffè and took his seat. For a jolly joke, everyone else snuck in behind him. Then they all shouted "Boo!" The Wabbit knew they were there all the time, but he went along with the joke. He jumped a bit - and then he said "What a surprise! I never knew you were there." It was a new Adventure Caffè that the Wabbit liked. It was quite near the Vatican and the drinks were priced a little above the norm. But no one minded because the Wabbit said he would pay. He fished in his fur for some money. "What's are you all having?" he asked. "Before we order," said Skratch, "What sort of adventure did you just have - all on your own." The Wabbit shrugged. "You tell me." Skratch paused for effect. "It was rather like a road movie, he meaowed. "Nice to be along for the ride but going nowhere in particular." "That's true," smiled Lapinette. "But Rommy was certainly a marginal character who rejected his given identity." Wabsworth rapped on the table. "No, it was about narration, identity and representation. The story confronted all three." The Wabbit felt it was his turn. "It was between genres," he stated. "Rommy was the unwitting yet powerful delinquent, always ready to assume the lead, no matter the cost." Lapinette agreed with the Wabbit. "He disturbed and fascinated - rather like a reflection of you, Wabbit." Wabsworth reconsidered and nodded. "It was hardly an easy ride. We were repelled by and attracted to Rommy who was a different order of being." The Wabbit turned round finally. "I'd like drinks." Lapinette pointed at him. "You're paying!" She twitched an ear and a waiter appeared. The Wabbit smiled. "I'll have one for my baby and three more for the road."